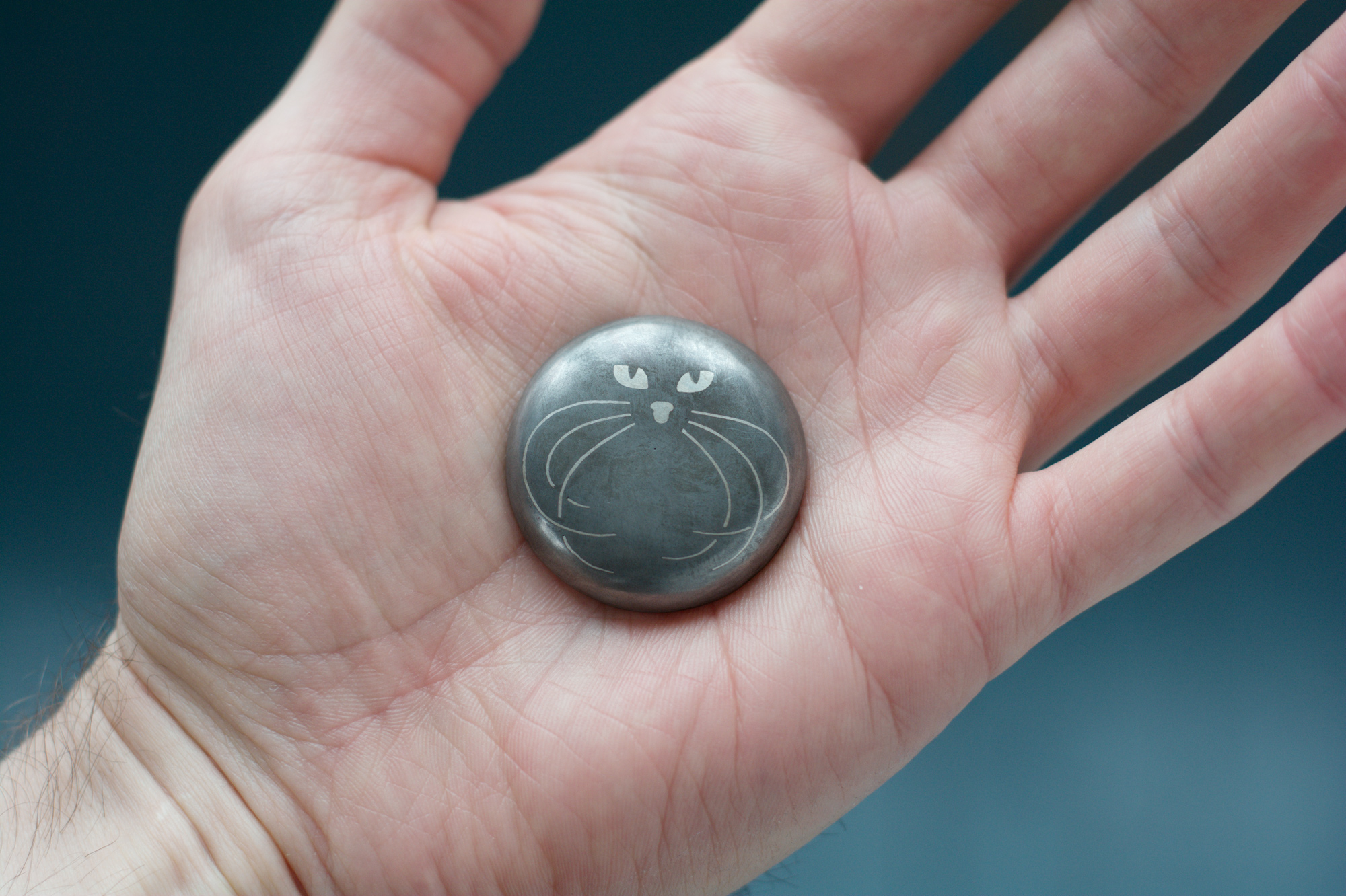 I favour recycled materials whenever possible. That has been my preference as long as I can remember, but it was further strengthened by personal experience in making iron from ore. That kind of stuff just puts things into a completely new perspective. 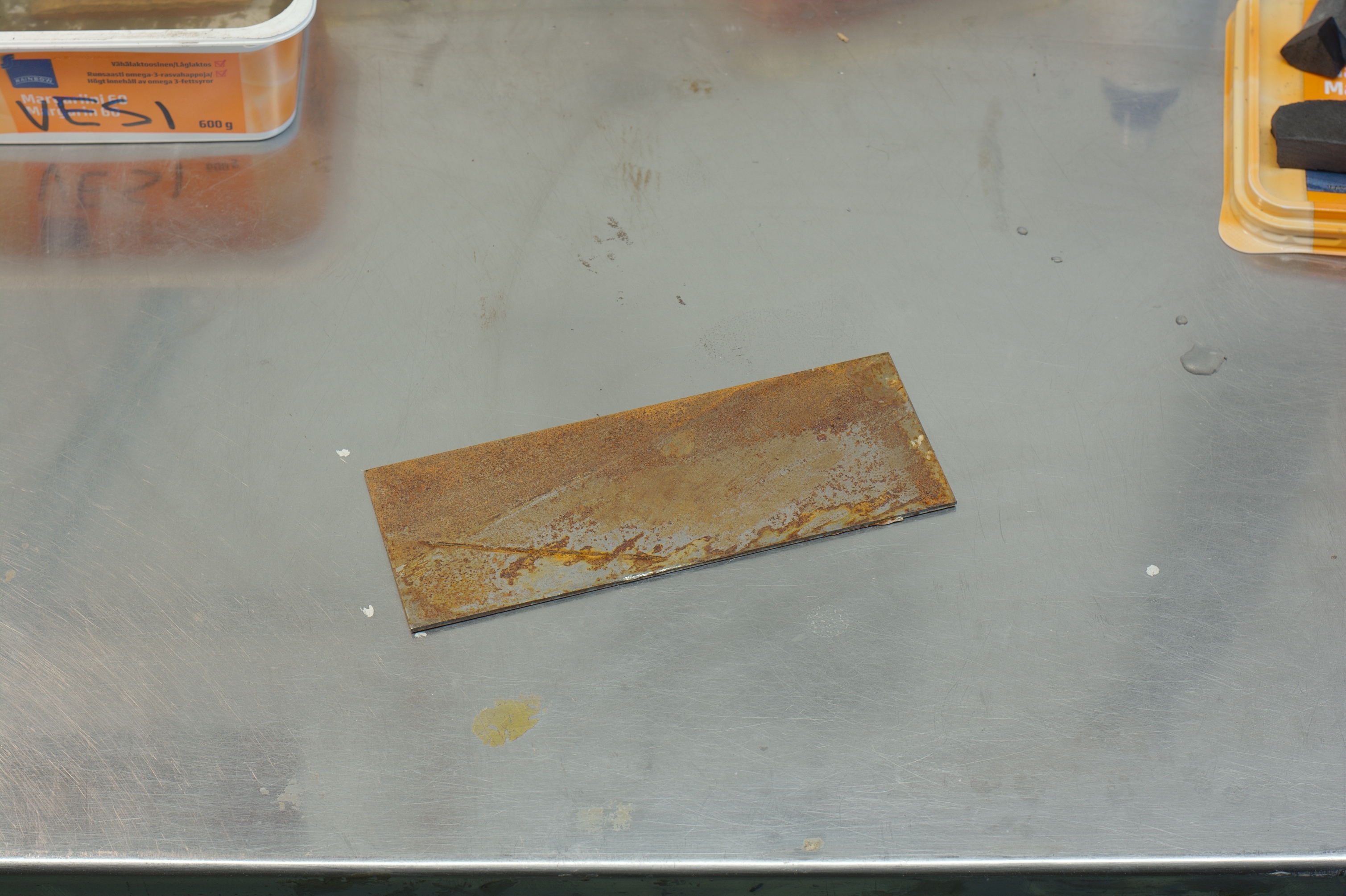 I had found this piece of 2 mm steel that had rusted a bit. 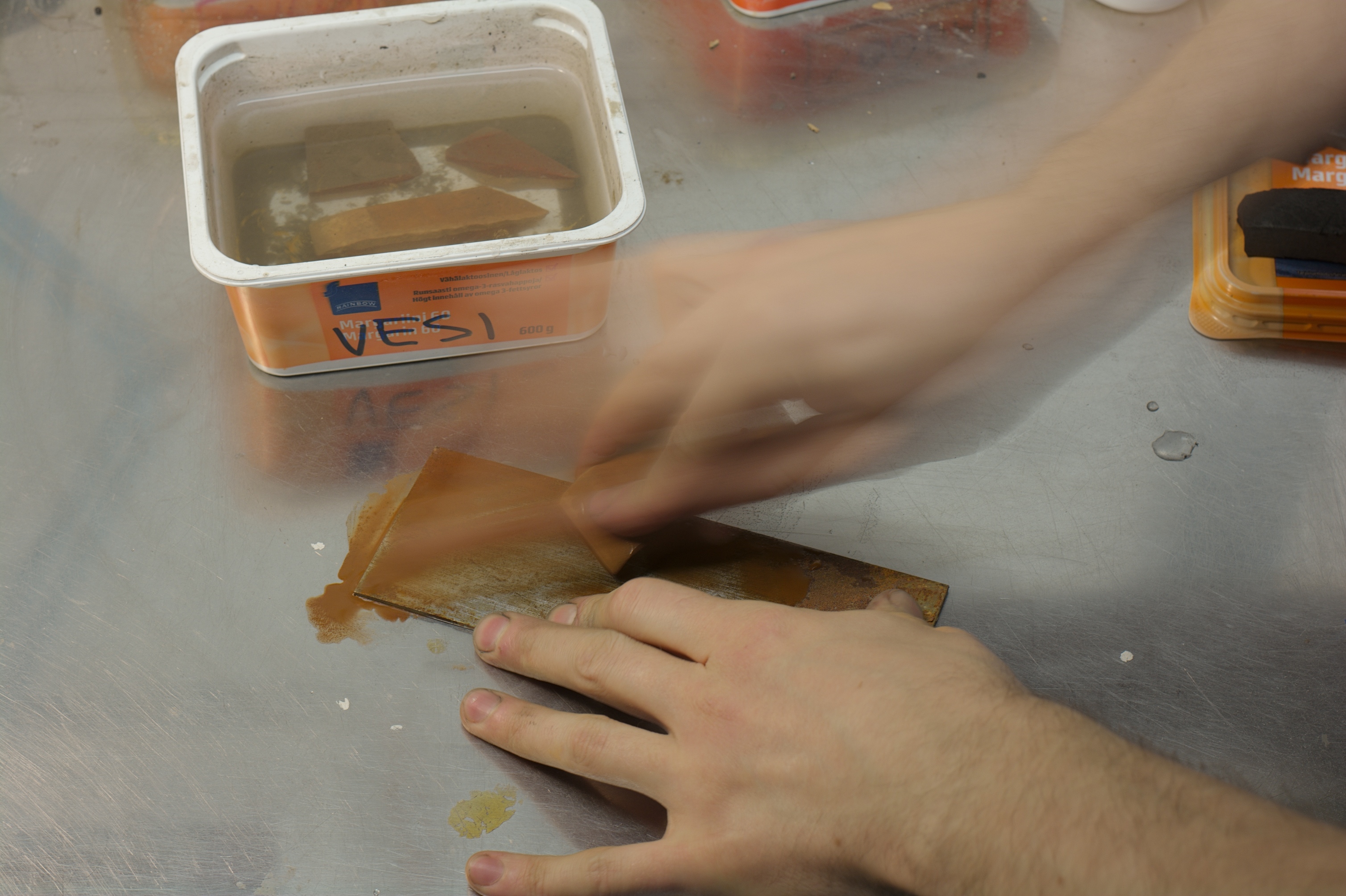 Some rubbing with a piece of a sharpening stone… 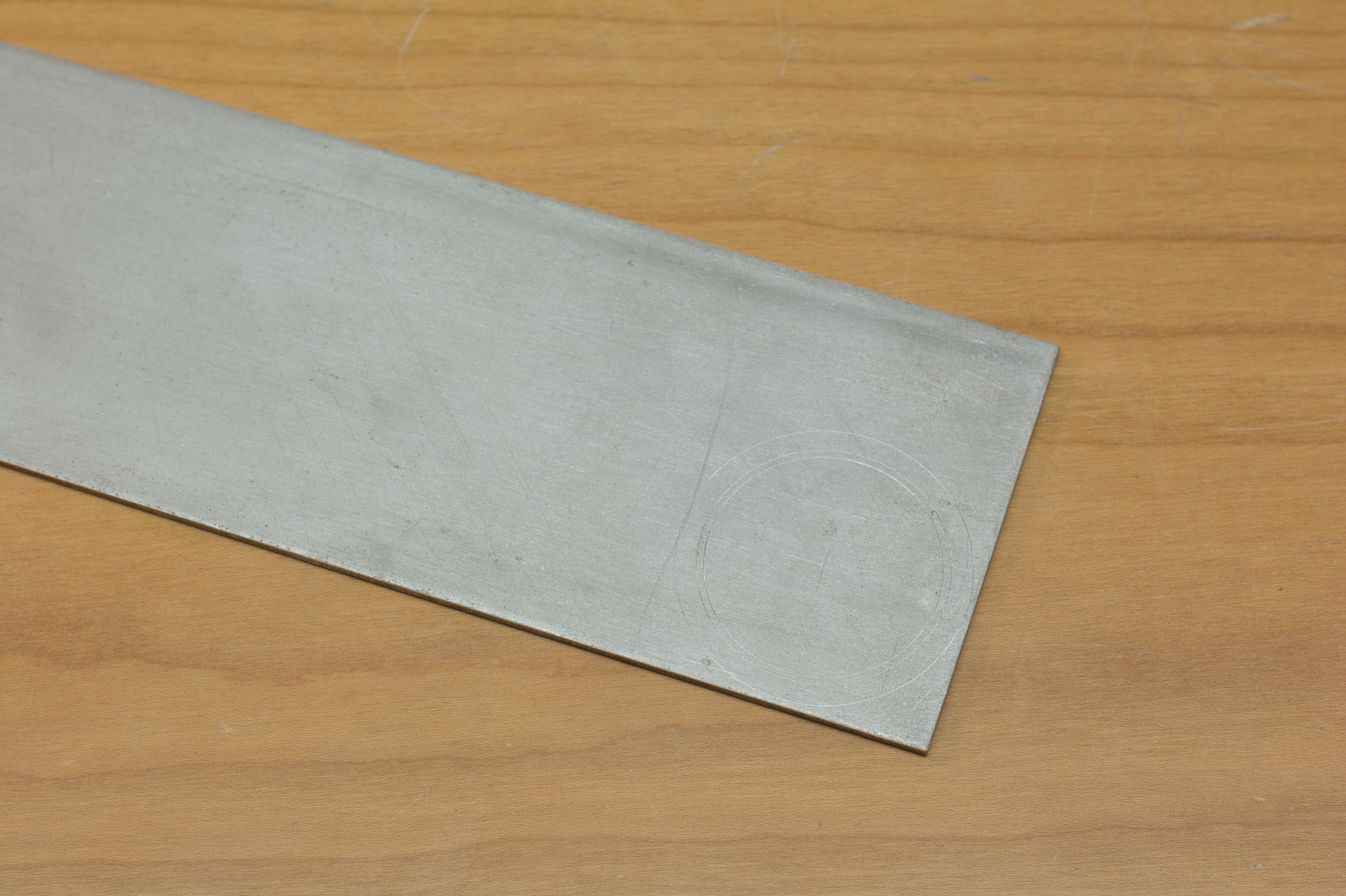 … and I can call it good enough. You can see faint scribe marks for cutting a circle in the bottom right corner, along with smaller concentric circles to guide further processing. 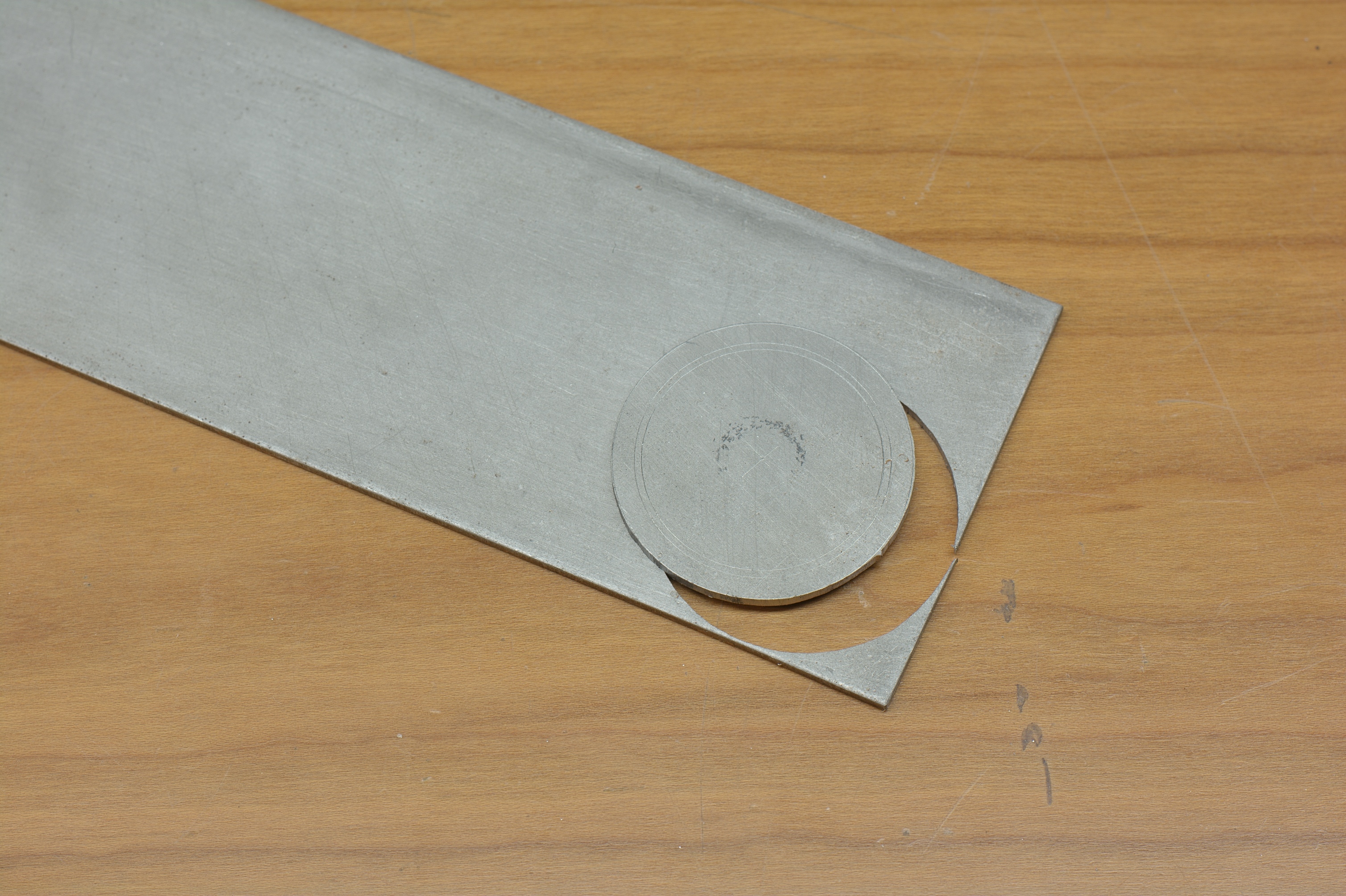 The blank cut out with a jewellers saw. You could say that it would have been quicker to just whip out the angle grinder, and that is true for this piece. Steel is cheap, so the additional waste of material wouldn’t really matter in this case, but you can cut much more complex shapes with a jewellers saw than this. With that end in mind, this was good practice. Besides, it is not as slow as one would think. I used the blade size of 2/0 to cut this, the blades are 0.26 mm thick. So there is very little material to remove, in other words: less work.

I didn’t take pictures of the raising process, but here’s a video of a master in work. Basically you take the plate, place it on a heavier chunk of steel of an appropriate shape and hold it a little bit off the edge. Then strike it with a hammer slightly away from the point of support. Rotate the workpiece and hit again, until you’ve gone all the way around. The steel plate work hardens and has to be annealed, that is, heated to a red glow and let cool as slowly as possible.

I was too hardhanded with the first blank; the circle tacoed in the raising process. Instead of trying to fix it, I cut a new circle and started over. Not very wise to introduce oneself to raising with 2 mm thick steel, I guess. Especially with a piece as small as this. Practice with something thinner and softer first. Then again, if you hit a thick plate in the wrong place, the plate kicks back at your fingers, which hurts and thus teaches you to hit in the correct place faster, no? 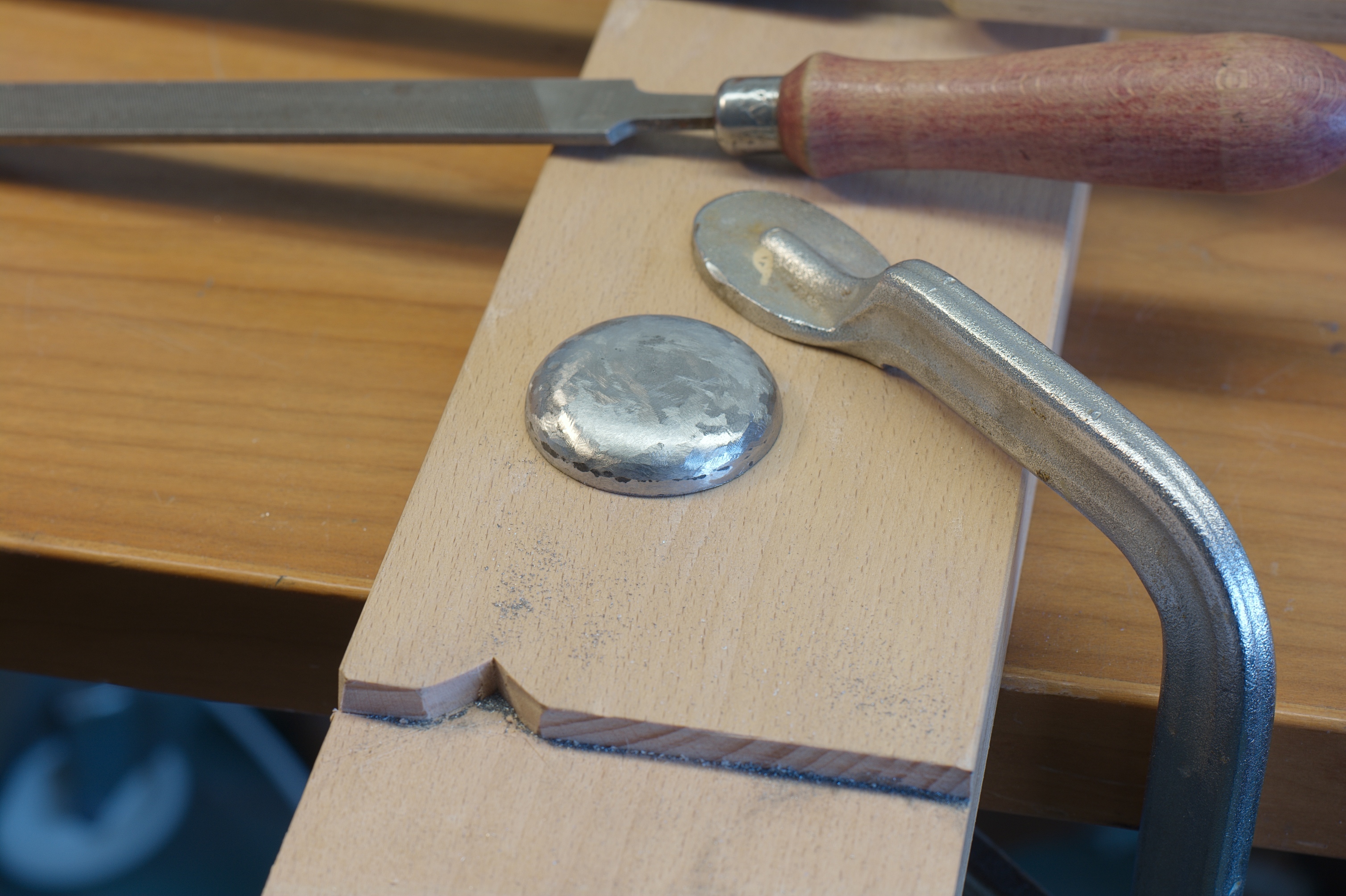 After a few rounds of raising and annealing I got more or less the shape I was after. I filed out the hammermarks and sanded with 320 grit paper to get most of the filemarks out. 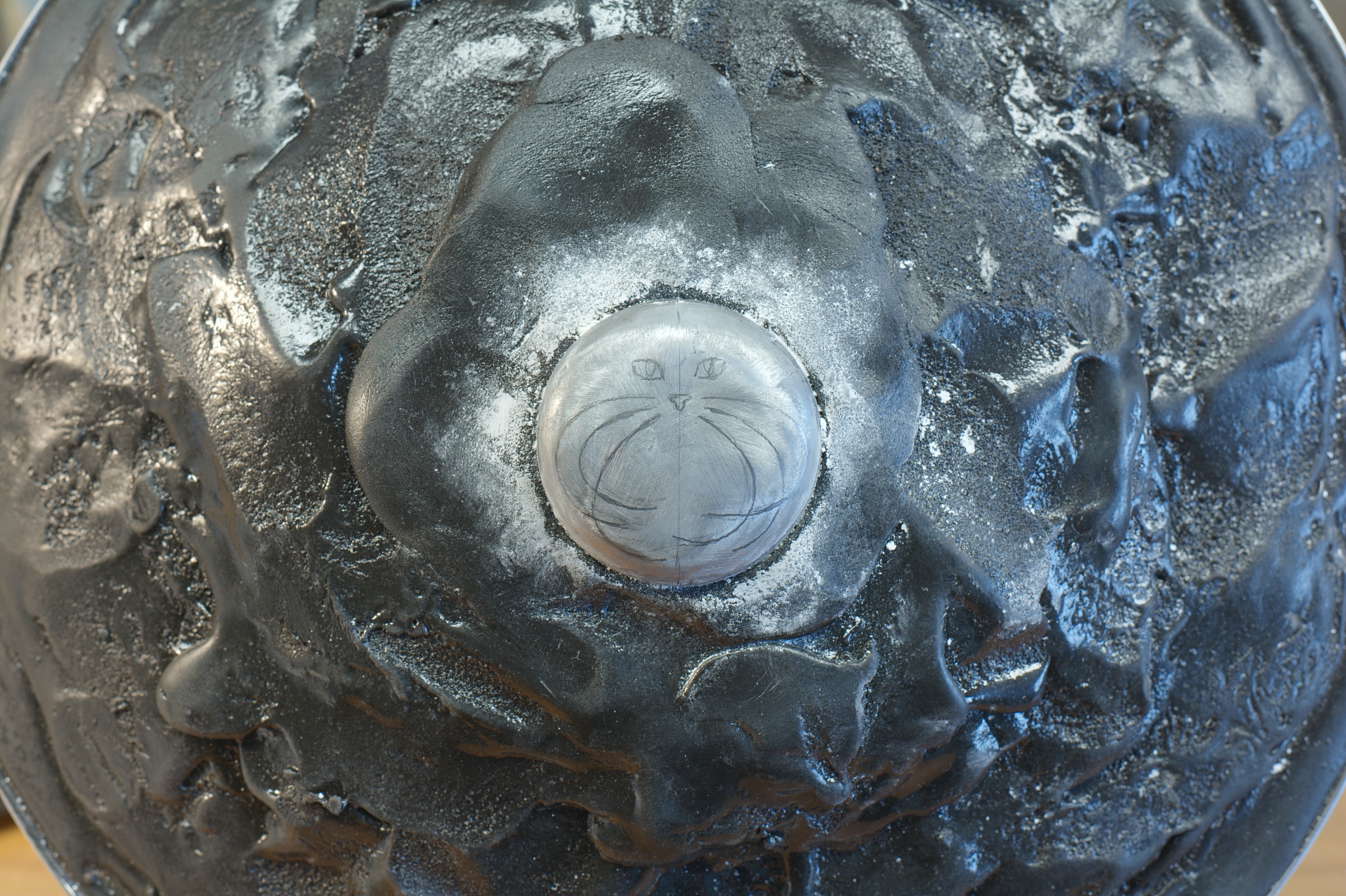 It’s a bit hard to see pencil lines on steel, so I rubbed a lump of plasticine on it to make the surface a bit oily then dusted chalk powder on it. Corrections are easy to make. Just rub it off and reapply.

I made some pencil sketches on paper beforehand, but still had to go through a couple of iterations on the steel. This is what I settled on. Since the pencil marks wear out so easily I scribed the final layout lines in. 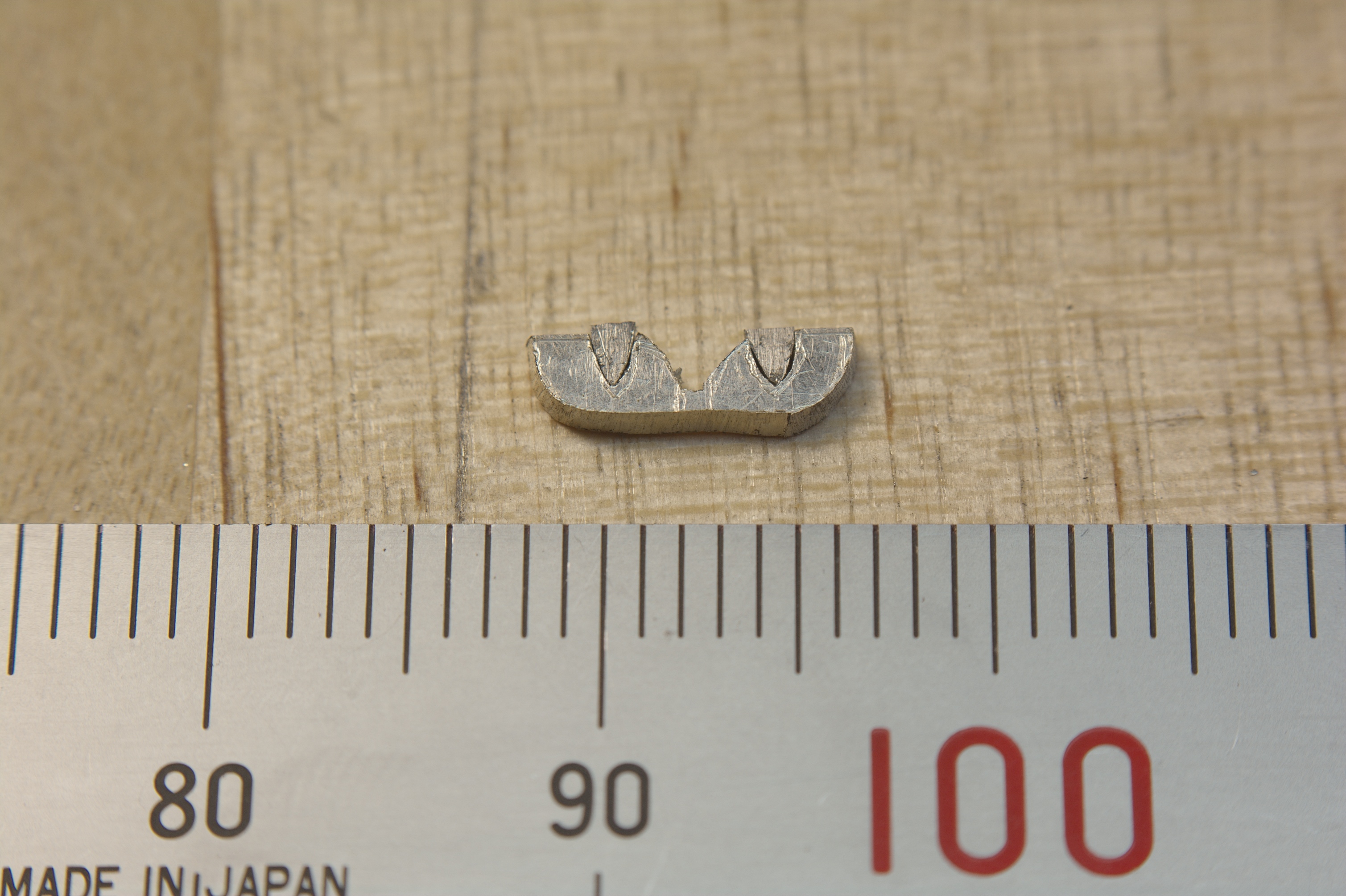 For the eyes and the nose I used 1 mm thick silver sheet. I kept the eyes together at first to make it easier to handle such small pieces.

It is possible to first inlay the eyes and then inlay the pupils in the inlaid eyes. However I took a slightly easier route by soldering the steel pupils in the silver eyes before inlaying them in the steel base. I used the same steel plate for the pupils as I did for the base to have an equal patina. 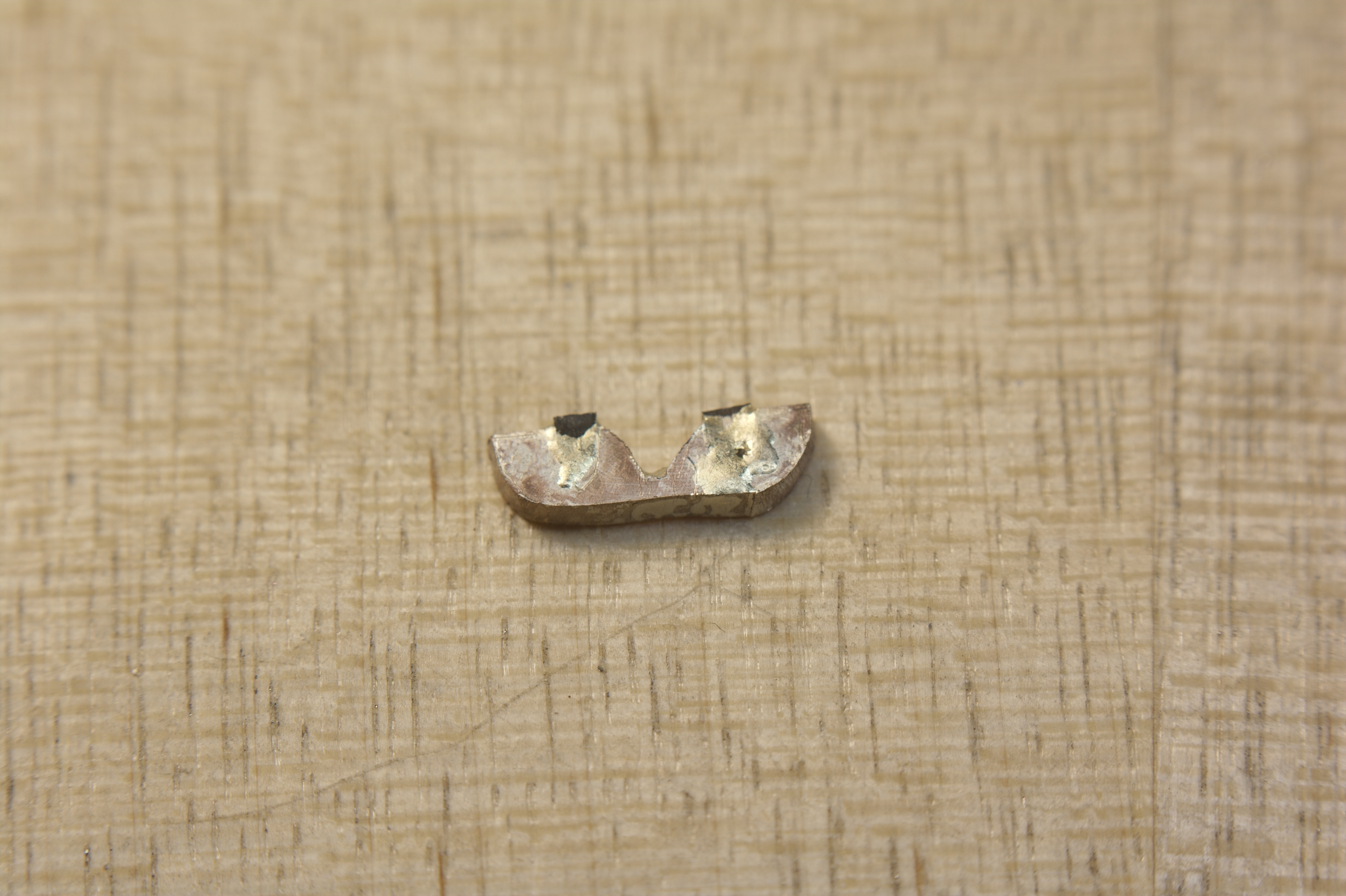 Here are the eyes after silver soldering the pupils in and cleaning in a citric acid pickle bath. 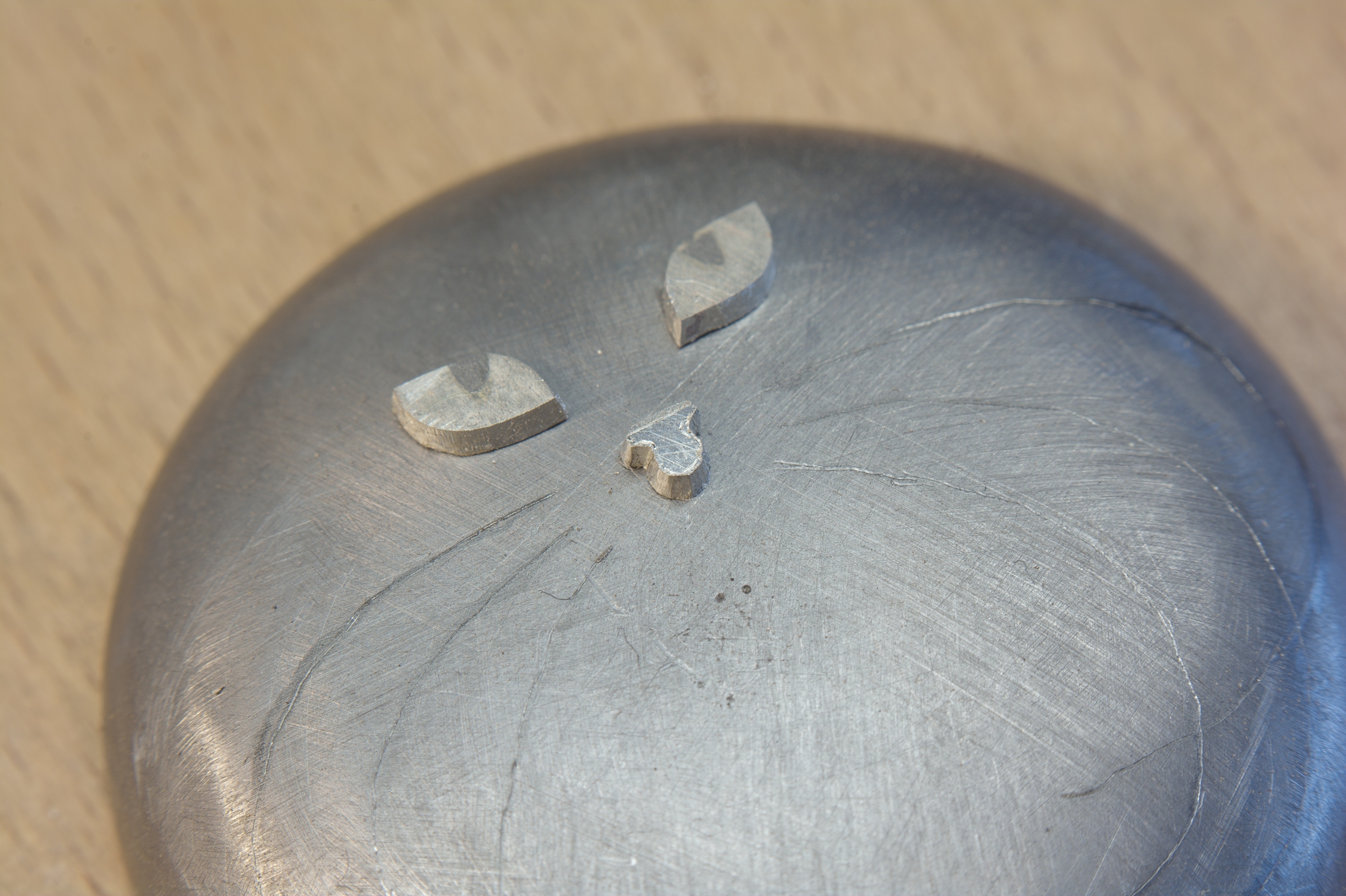 I separated the eyes, and finished the shapes by filing. The bottoms of the inlays are a bit wider than the tops to make the pieces key in once they are in place. I scribed around the cut shapes. 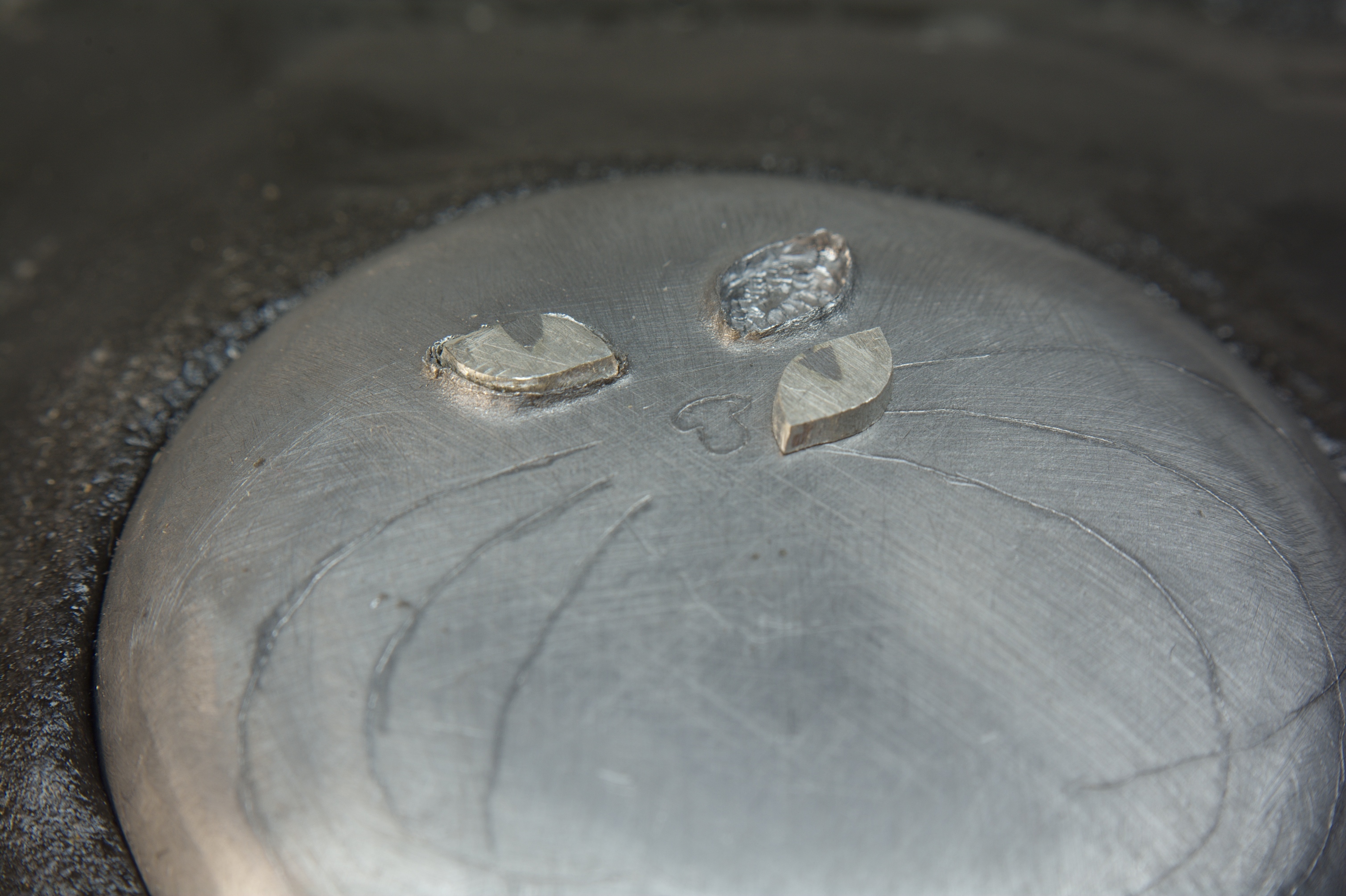 To dig out the place for the inlay, I first cut a v-groove around the shape, slightly inside the scribe lines, then pushed the outside wall of the groove out, to form a raised lip. Then I excavated the middle part with round chisels. After a good amount of dry fitting and cutting and pushing the edges I was close to a tolerable fit. The lips of the inlay sockets look quite thin and not very pretty, but they turned out ok in the end. 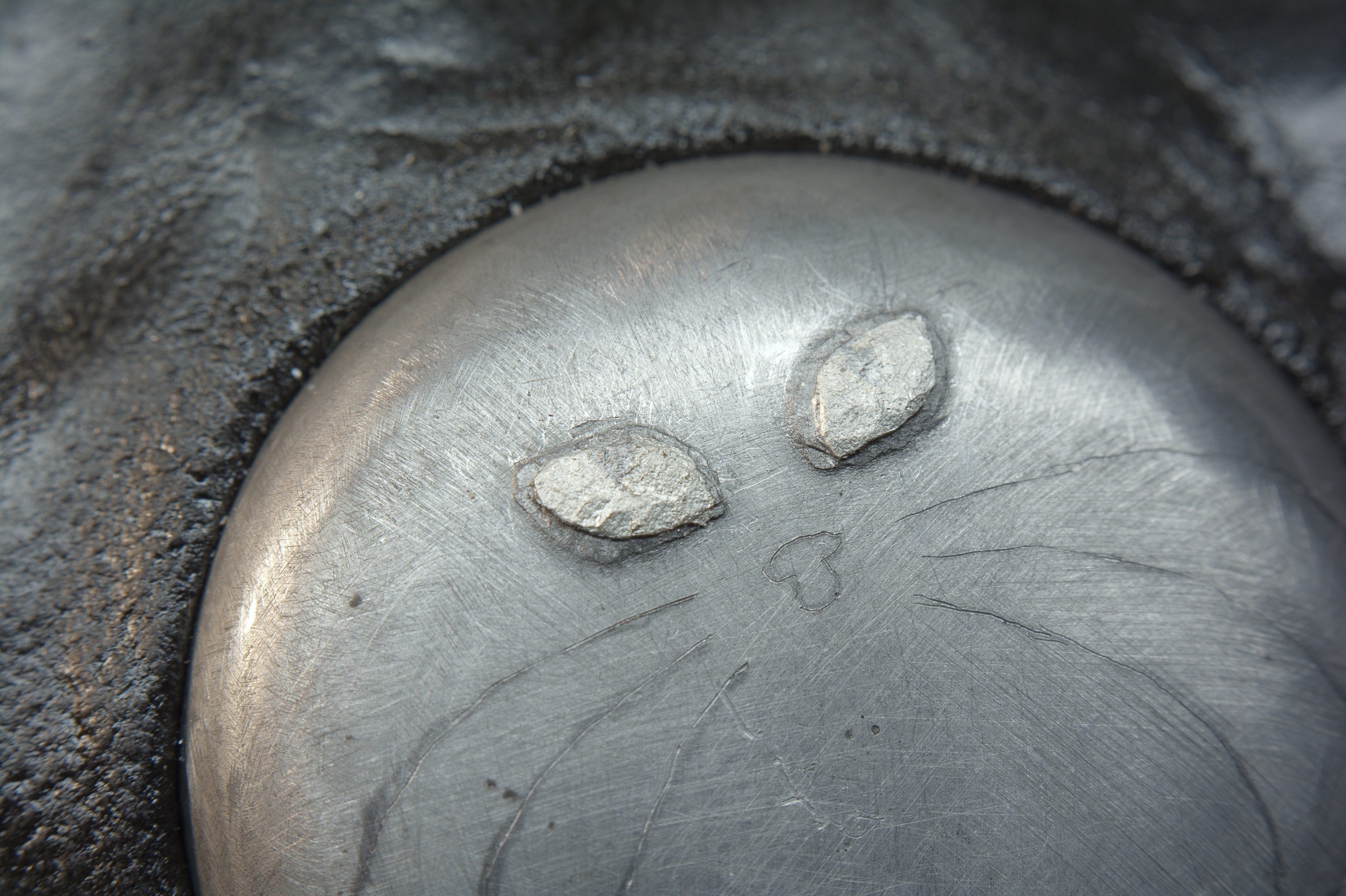 I then proceeded to gently tap the first piece in straight from above with a flat faced punch. The face of the punch is slightly roughened so as to not slip and damage the surrounding areas. Then I tapped the raised lip of the base metal down and towards the inlaid piece to make it impossible for it to come out. This also required a special tool. I made the tools as I progressed with a practice piece earlier. Same procedure for all the other pieces.

The process for the flat pieces is called hira zōgan (平象眼 flat inlay). My resources were from the Japanese tradition again, but I suppose the techniques are more or less the same in the Western tradition of fine metalworking. 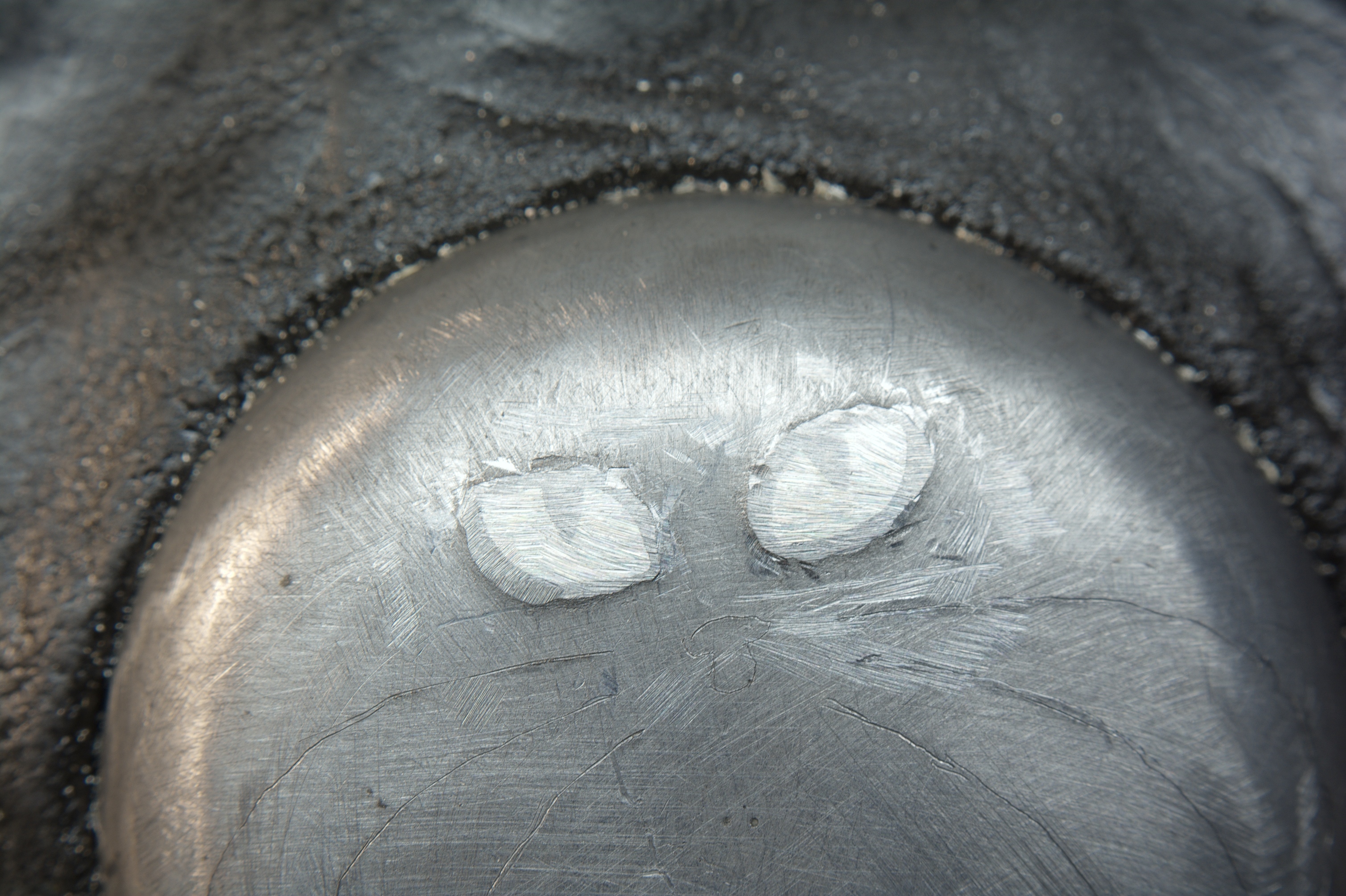 Here is the piece after filing the eyes almost flush. I left some excess material to finish after I’m done with the whiskers. 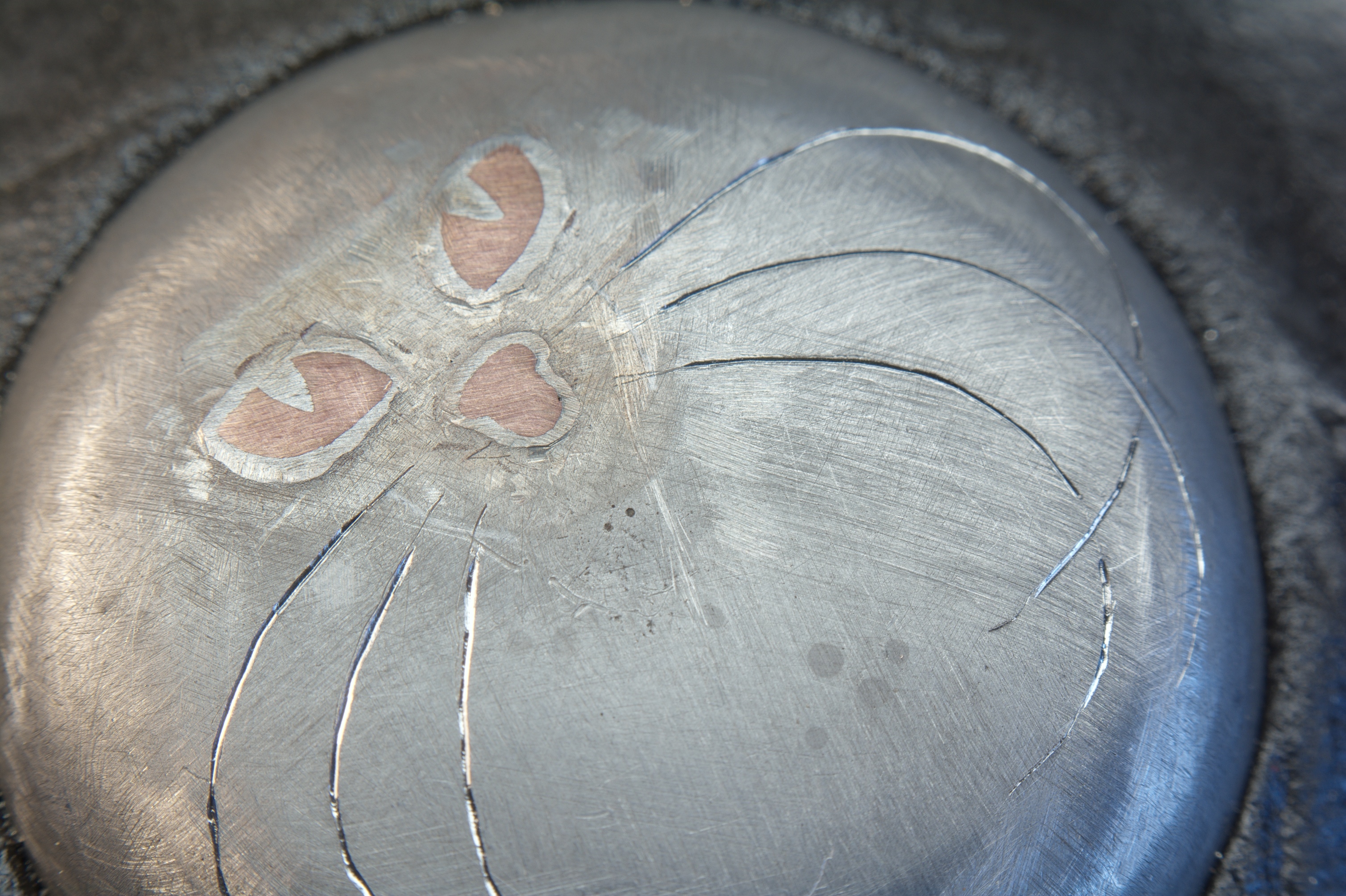 Here the nose is inlaid as well. I wiped the surface with a dilute solution of copper sulphate and water to make the inlays more visible.

I also started the inlays for the whiskers. The first step was to engrave a narrow groove. You can see that I missed some of the scribe lines… I mean, ”I fine-tuned the composition” a little bit. Yeah, that sounds better. Unfortunately, I got into a flow and forgot to take pictures during the inlaying. However the process was the same as in a practice plate I made before: 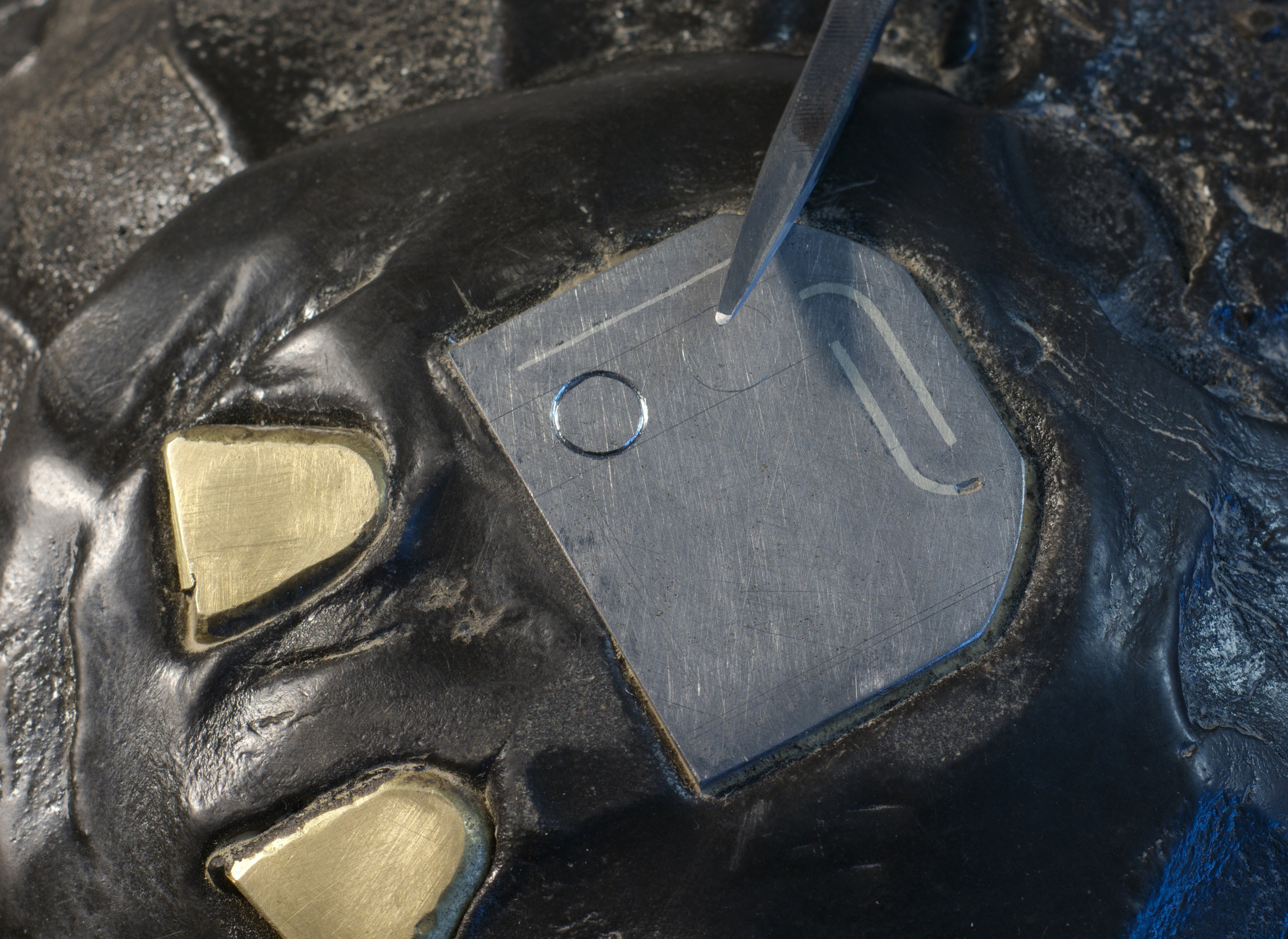 The inlays for the whiskers are made with a technique called sen zōgan (線象眼 line inlay). First I engraved the groove with a v-chisel. The chisel in the photo looks like a round chisel, because I had failed to sharpen the top face perfectly flat. The very tip curves away from the light source, appears darker and blends into the background. 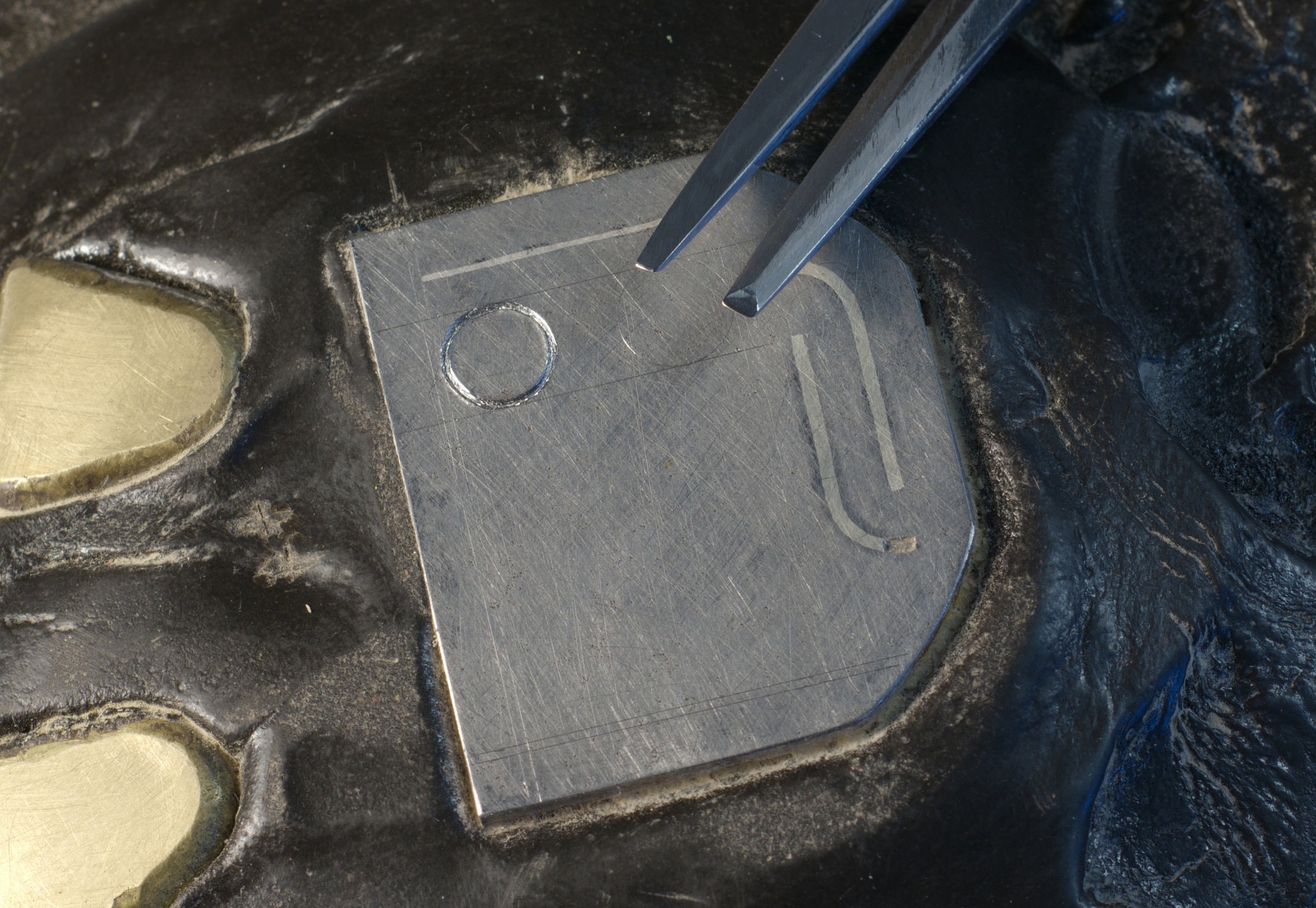 I tapped the sides of the groove outwards to form a lip, with inlay ”chisels” which are a bit like slightly rounded blunt chisels. They are designed to force the material to move, not to cut material away. The process is basically the same as what I did with the eyes and nose, but a bit more difficult because of the thinner groove, especially so with a tapering line as I was attempting with the whiskers.

The two chisels in the picture are both the same kind of inlay chisels. One smaller than the other and upside down.

I made all of my chisels and punches according to a set of diagrams of classical japanese tools. I first wondered why the inlay chisel needed to have the long ridge on the top face. I figured that that may help a little bit in making the chisel fit in tight places. Some other tools also seemed to have shapes that didn’t strike to me as being absolutely necessary considering the purpose of the tool. I still followed the instructions, though.

Having made a bunch of these tools and having them laying on the table, while working, it occurred to me that these little details help identify the chisels! These things are really small, the business ends are from 0.5 mm to 4 mm wide, or so. It would be nearly impossible to tell a flat carving chisel from a similarly sized inlaying chisel without picking each one up one by one and looking at it up close. With the ”excess” design elements you can tell the ”category” with a glance. An incredibly sophisticated system, I must say. 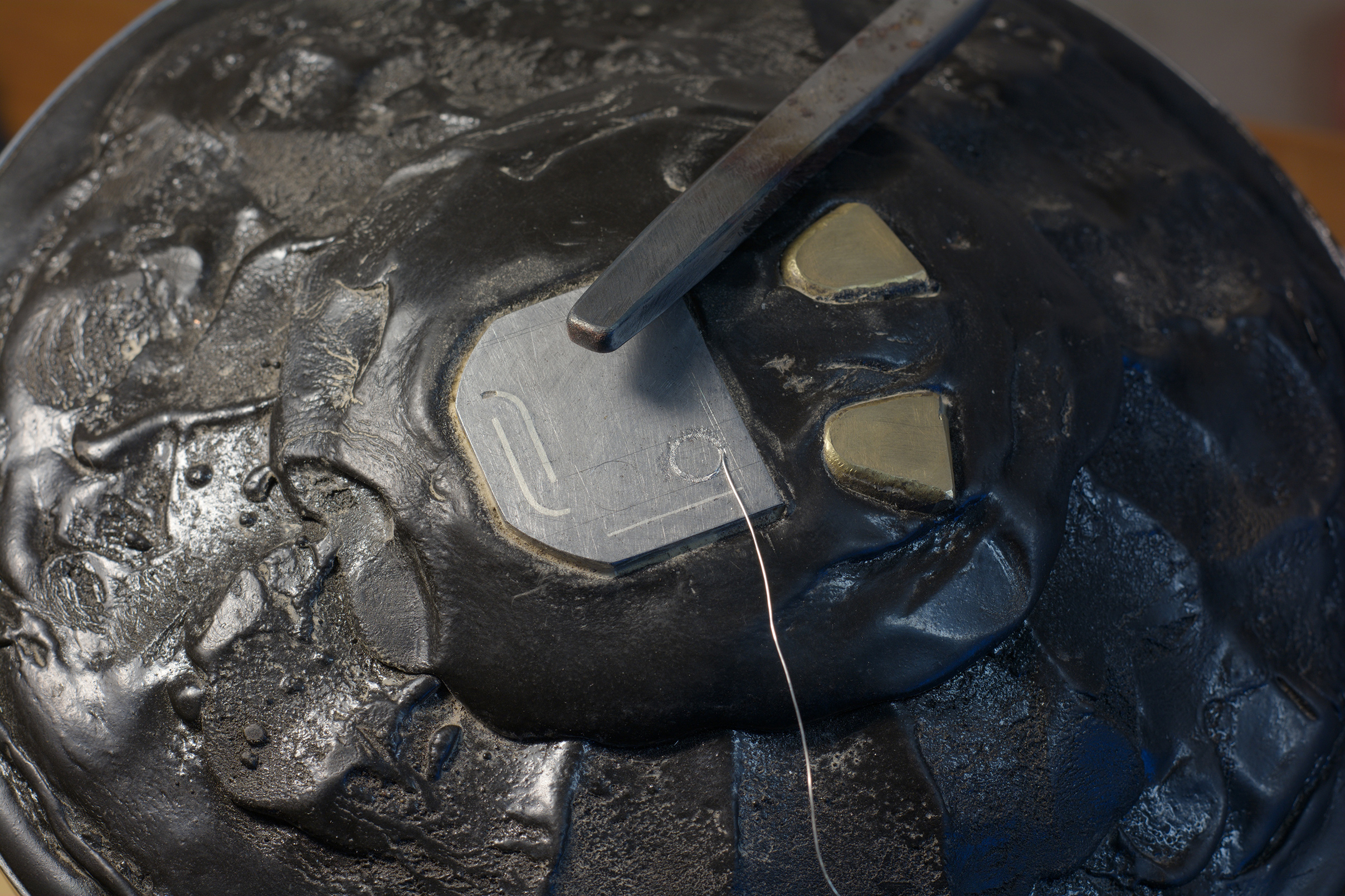 The groove cut and the lip formed, I started inlaying some 0.3 mm silver wire. I placed the wire on the groove and tapped it in with a rough flat punch. The punch forces the wire to fill the cavity and at the same time pushes the protruding lip of the groove down on the wire, locking it in place. I bent the wire and punched it in as I went along, pressing it down with the punch while bending to prevent pulling it back out. 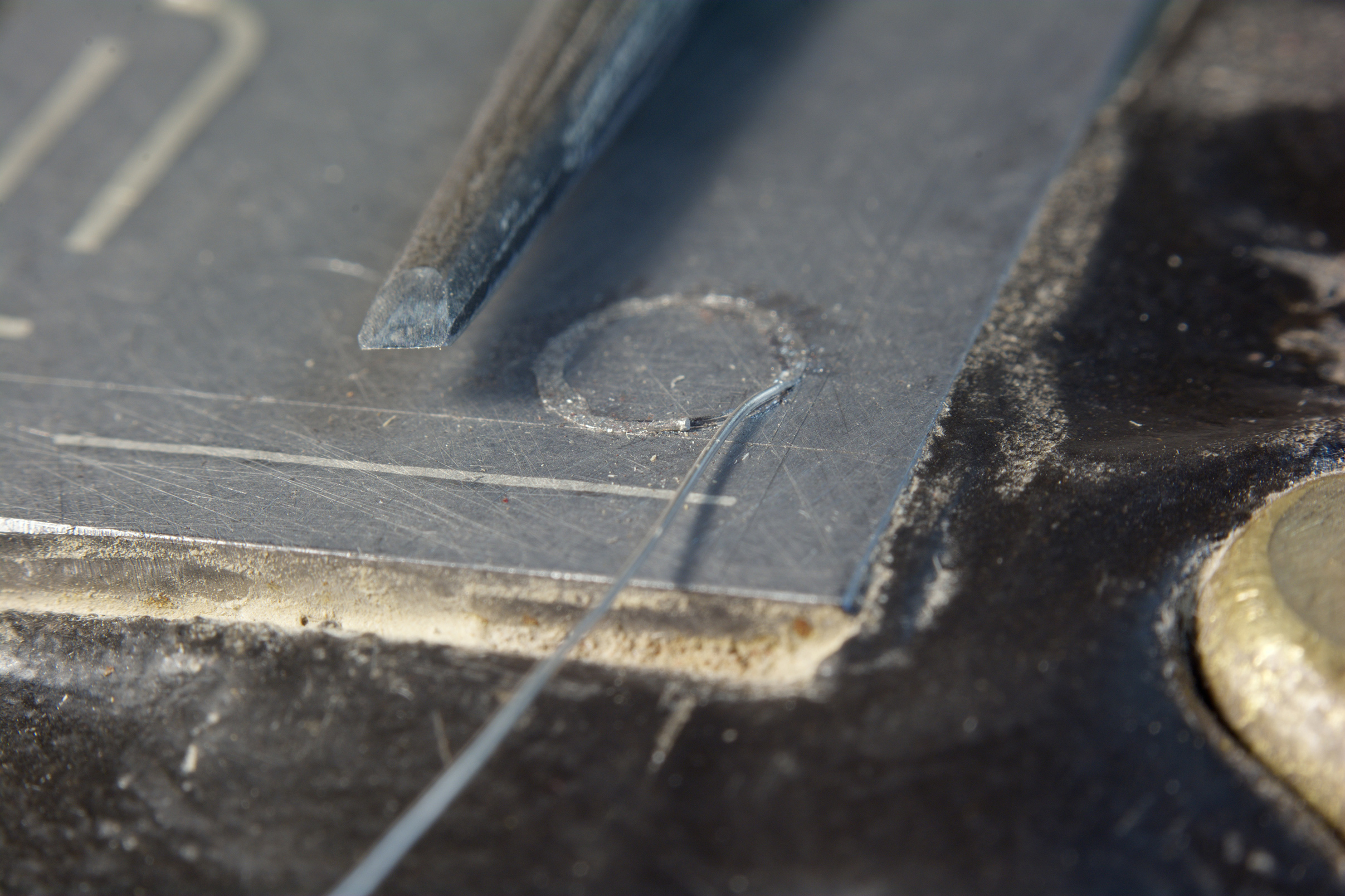 Getting close to a full circle I cut the wire with a flat chisel. You can see the beginning end of the wire still sticking out a bit. Both ends will go in together in the end. 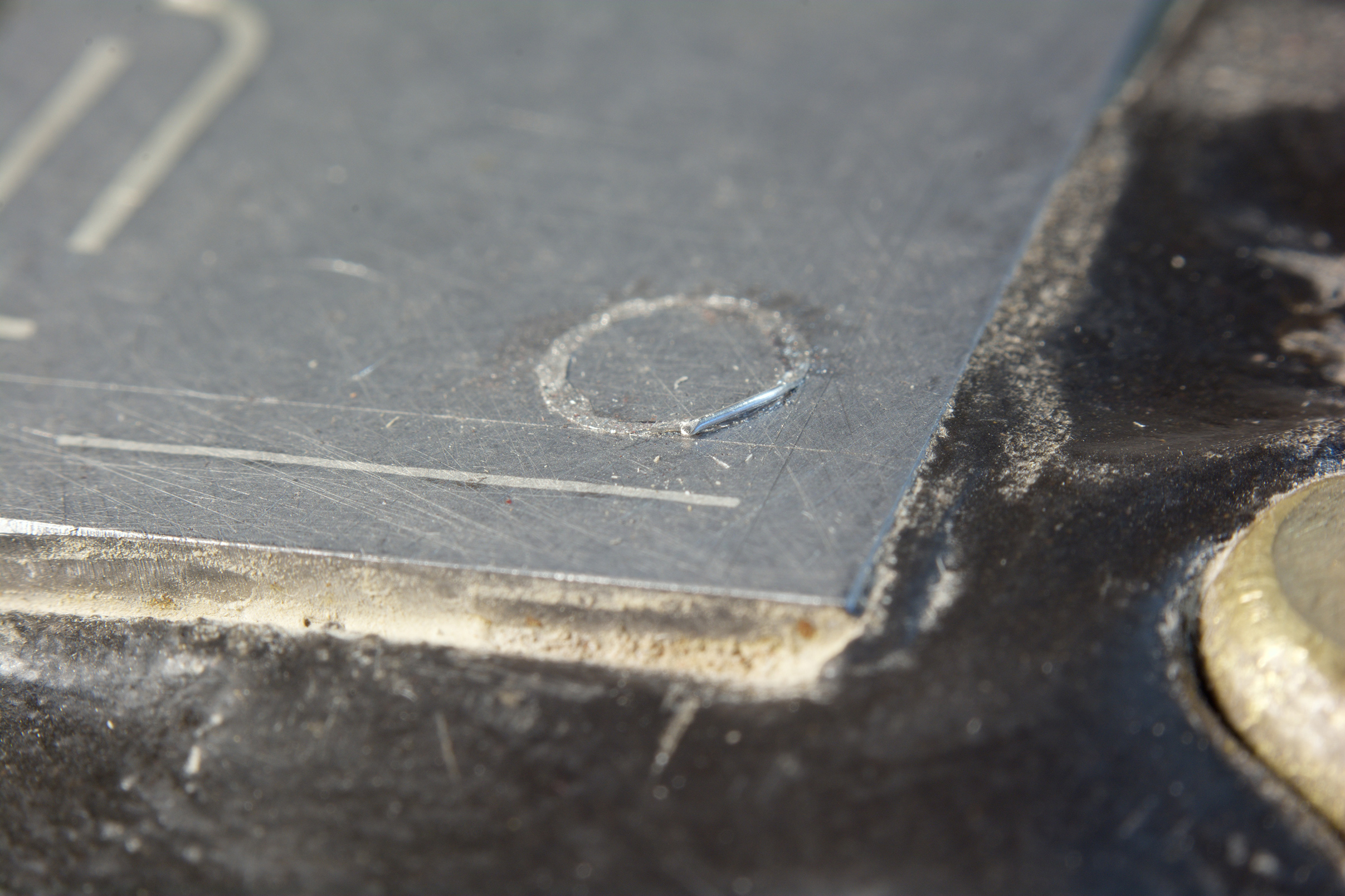 I left a chisel mark in the base plate, close to the cut end of the wire. Well, that’s what practice plates are for… 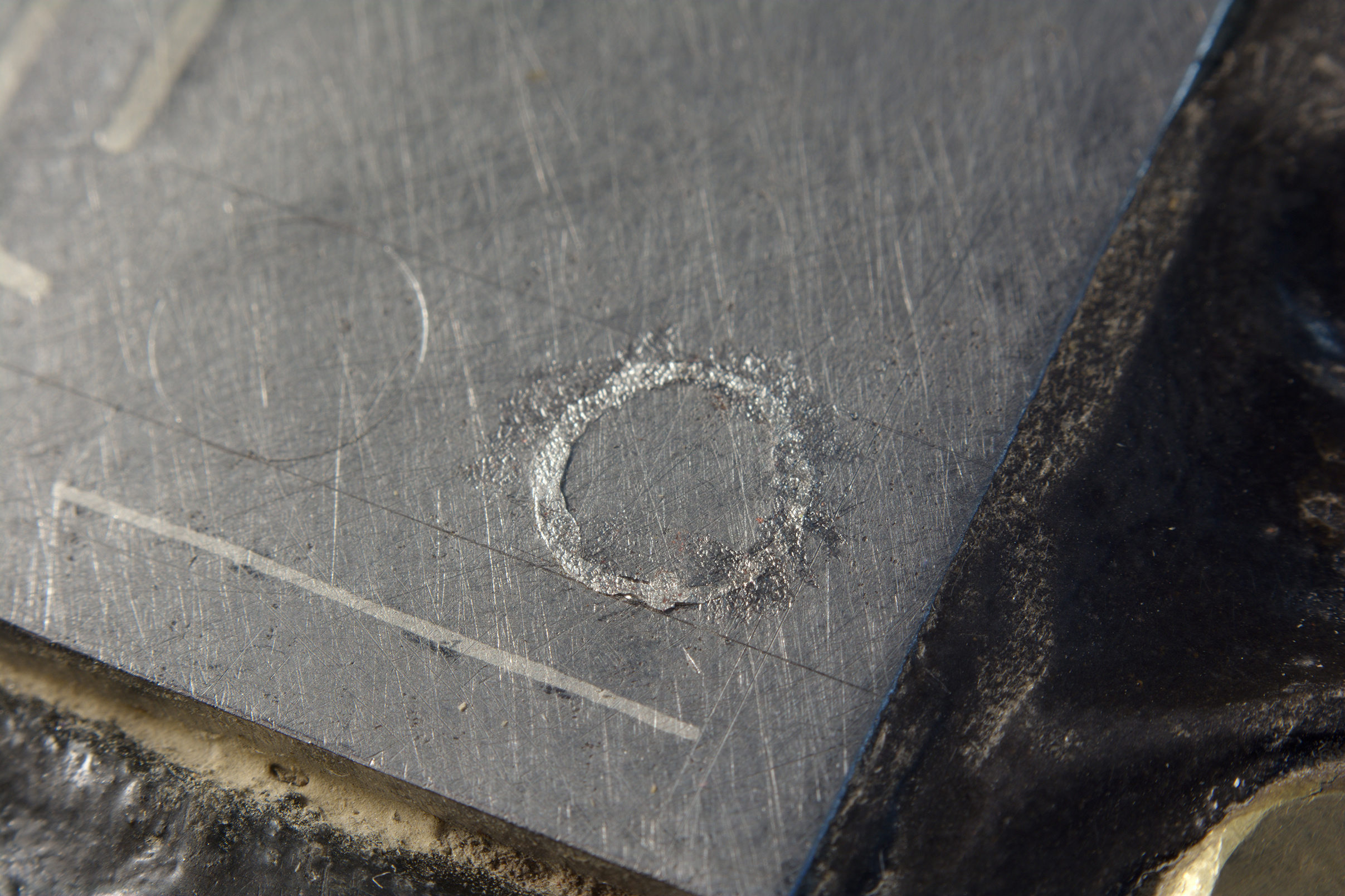 Here’s the full circle tapped in. I made the groove a tad too deep and/or too wide, the wire only barely filled it, so I ended up marring the surrounding surface with the punch. Well, that’s what practice plates are for. At least I didn’t waste silver by having much excess to scrape off. 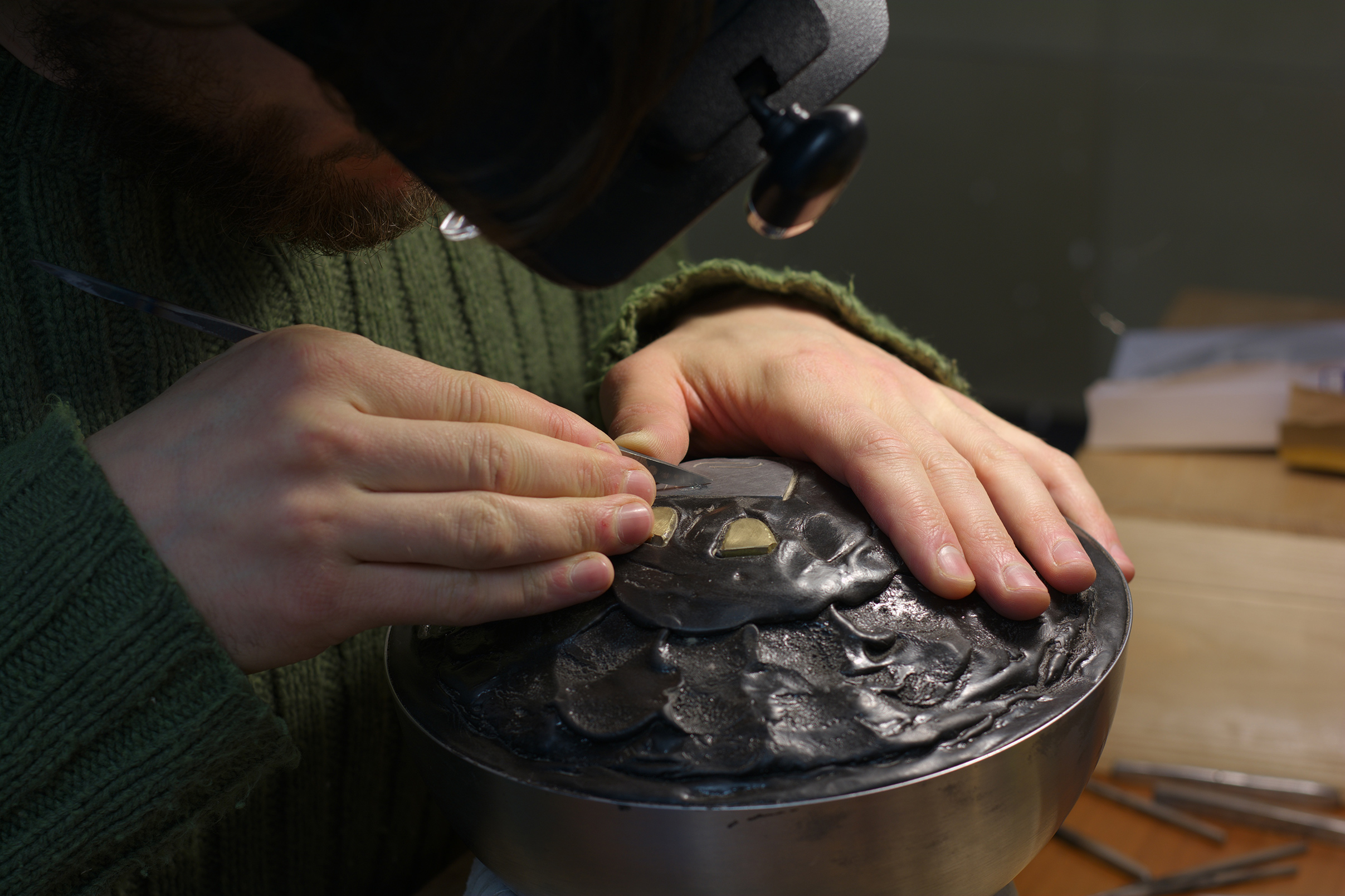 I hold my left thumb in place as a pivot point and twist my right hand against it. The scraper is quite long and this manner of working generates a lot of leverage in the tip in front of the fulcrum point, the thumb that is. It’s a very accurate tool and light to use. Archimedes approved. 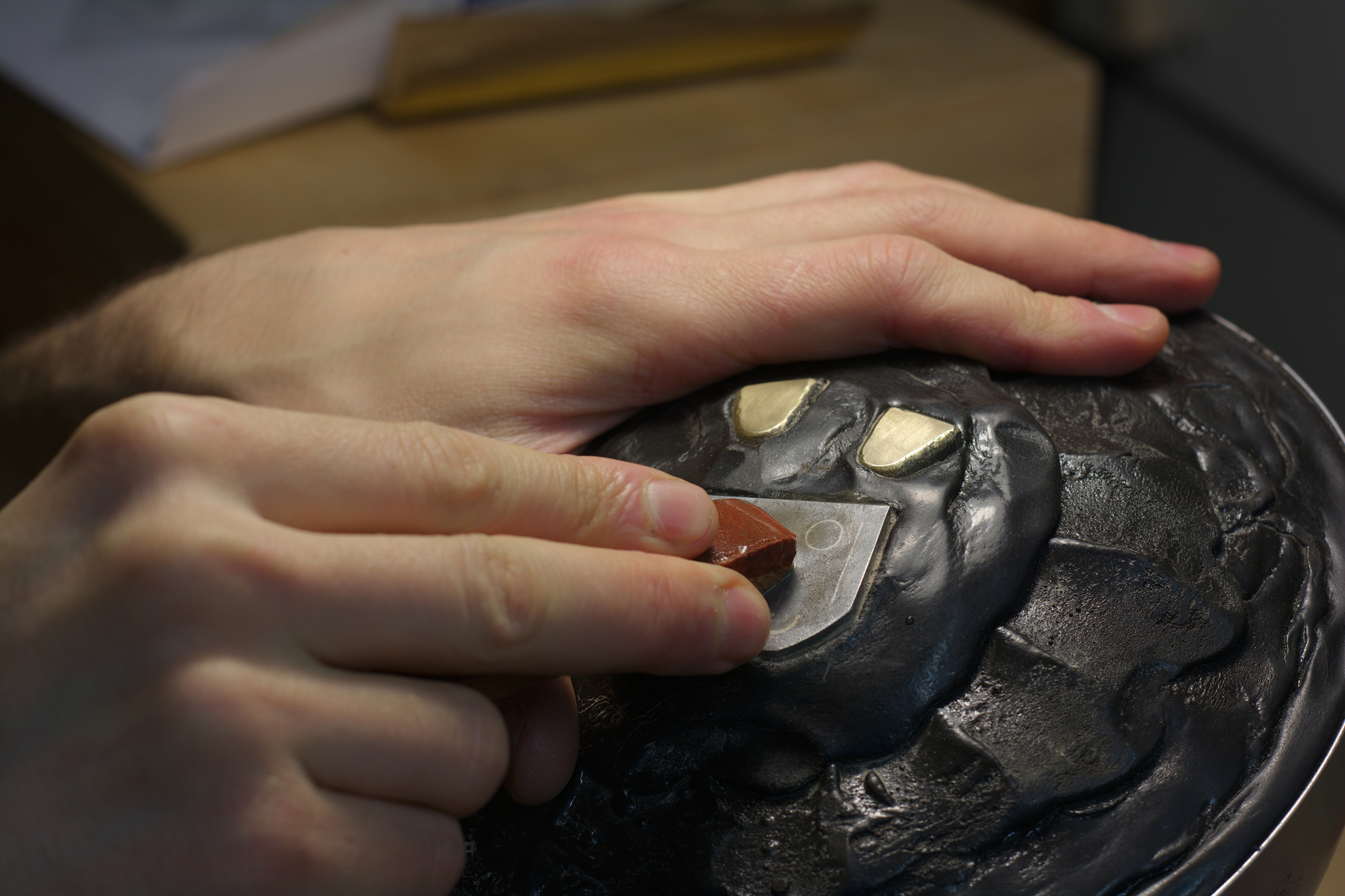 Flattening out the scrape marks with a piece of sharpening stone. 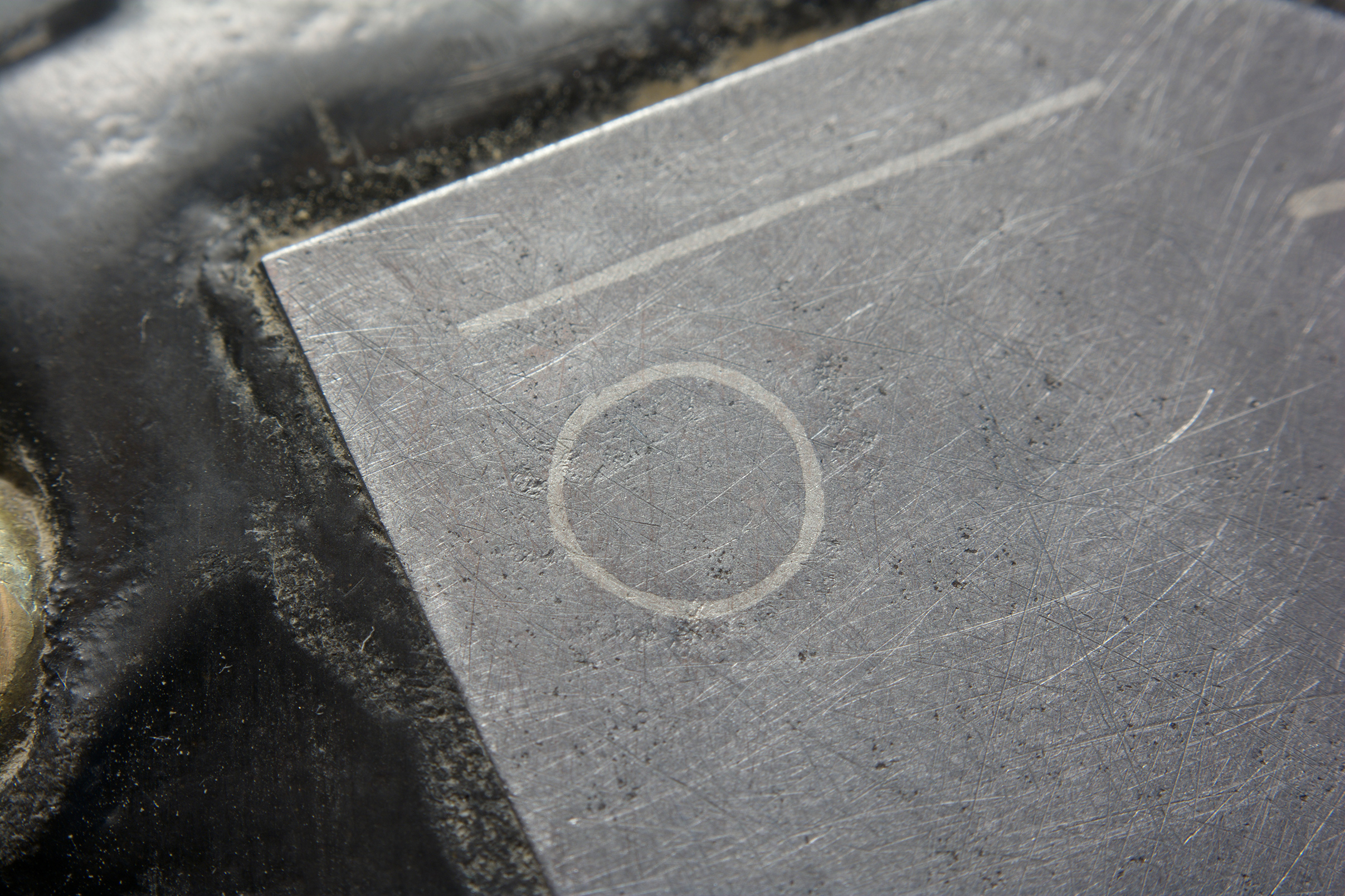 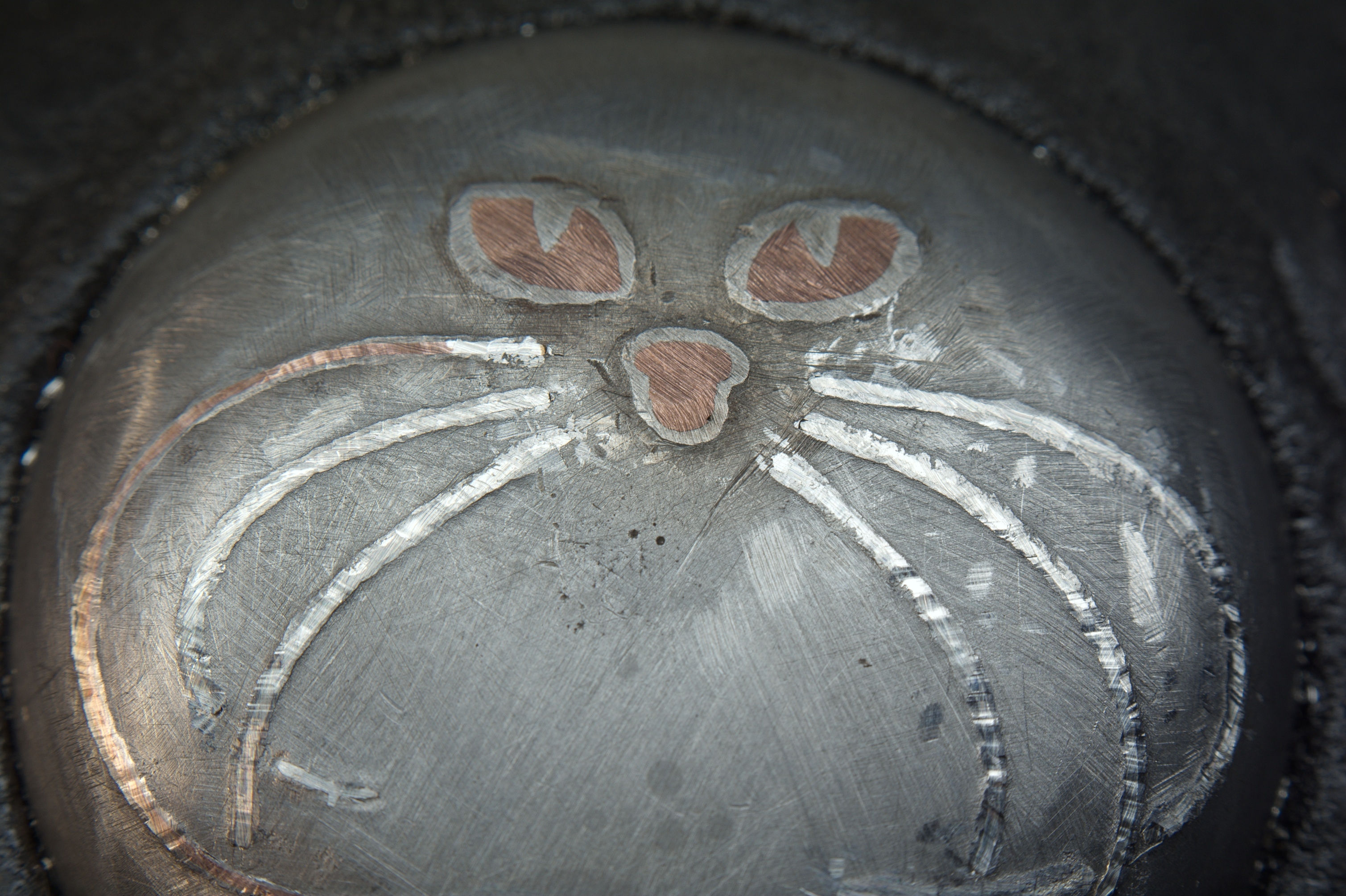 Back to the Whiskers. This image shows the piece after scraping the inlaid wires but before filing and sanding with progressive grits. 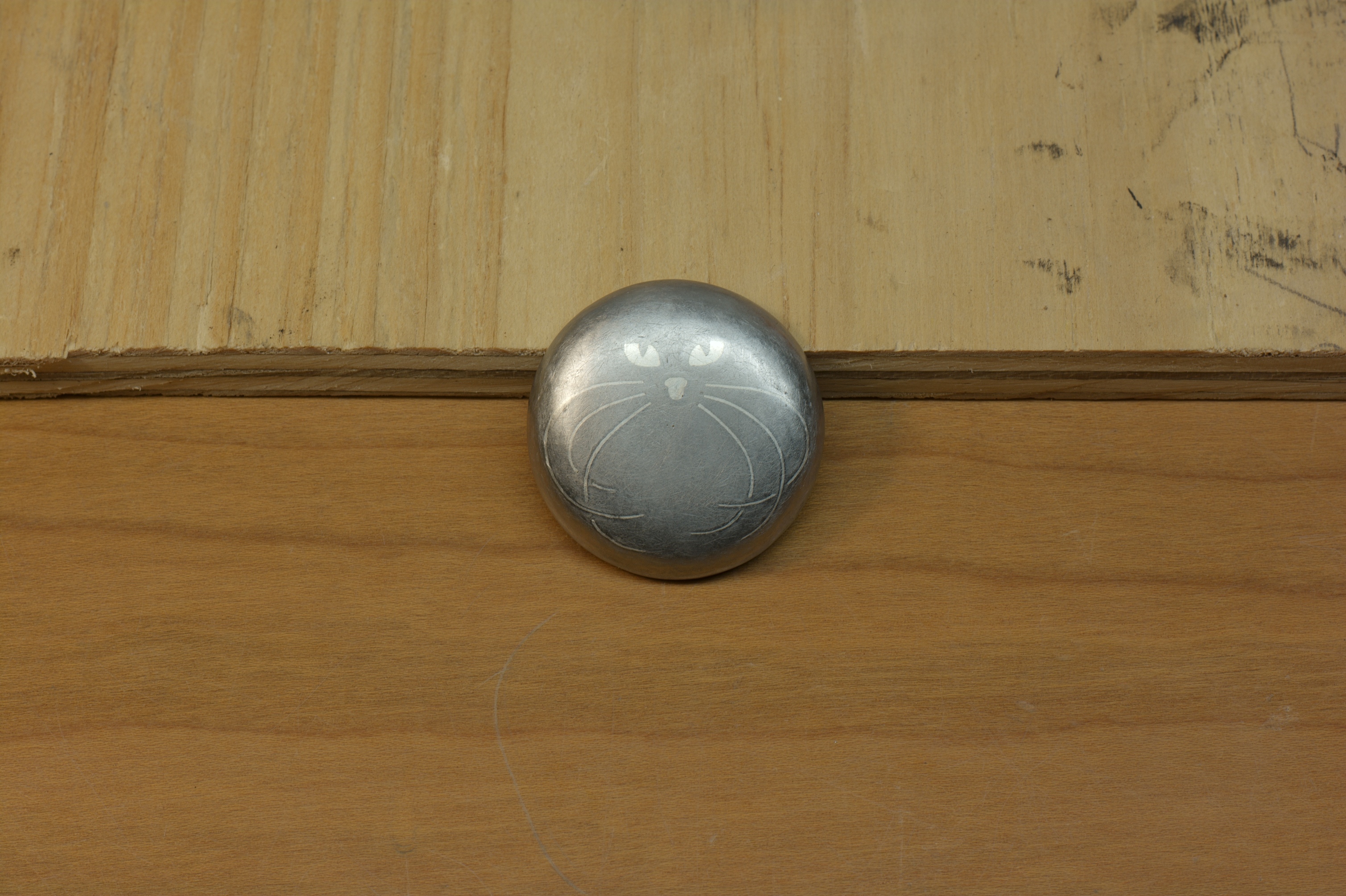 I wasn’t going for a super blingy surface, but more of a satin sheen. 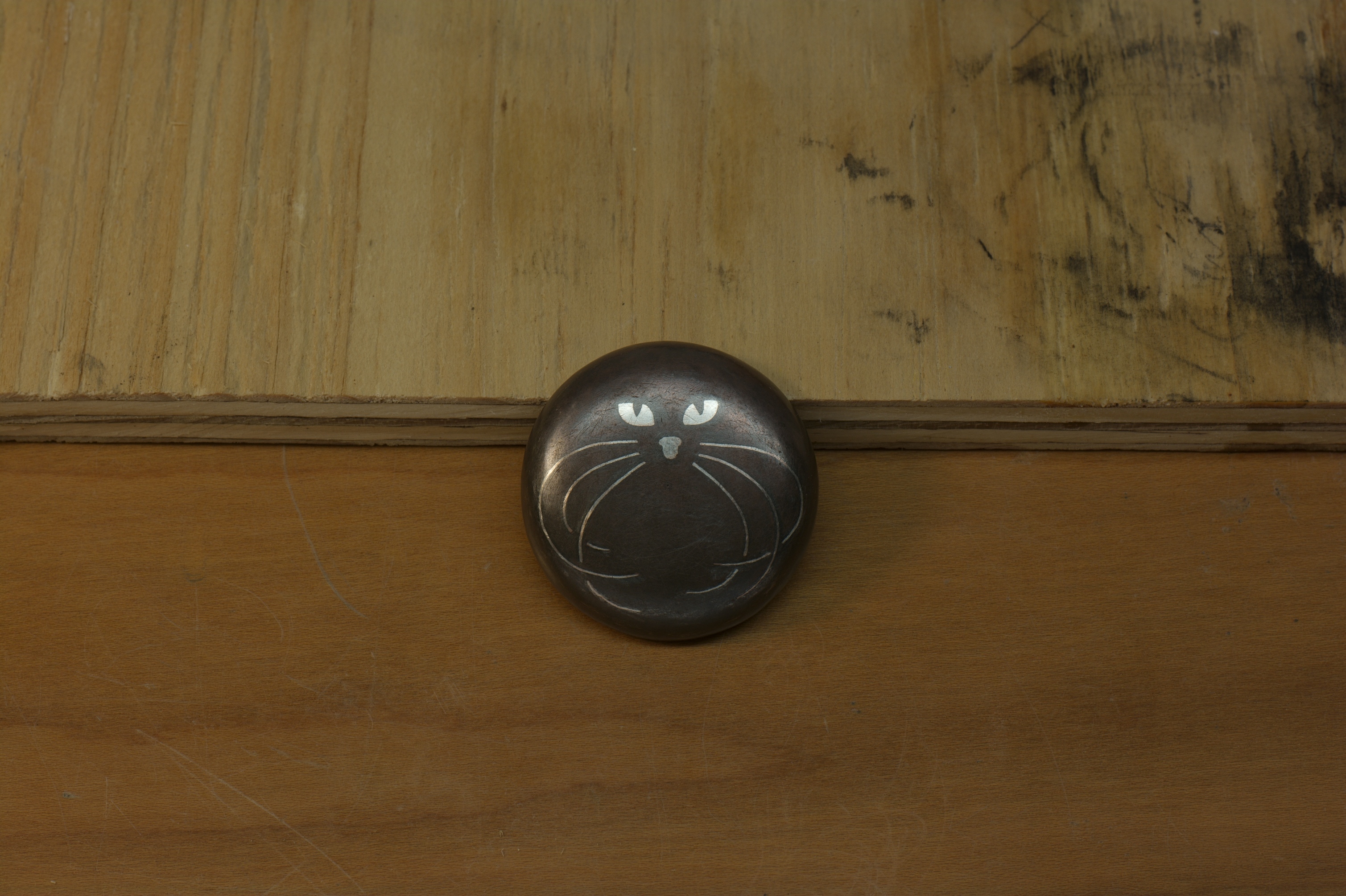 The patina revealed some nasty scratches, so I took a couple of steps back in the sanding grits, and patinated the piece again.

I made the patina mixture according to an old recipe. There’s a bunch of stuff in it: water, red clay, salpetre and ferric sulphate among others. The patina is acidic and is neutralized by dipping the workpiece in water with birchwood ashes in it. The ash turns the water into a weak caustic lye solution thus neutralizing the acids but it’s still gentle enough to not strip the patina off. 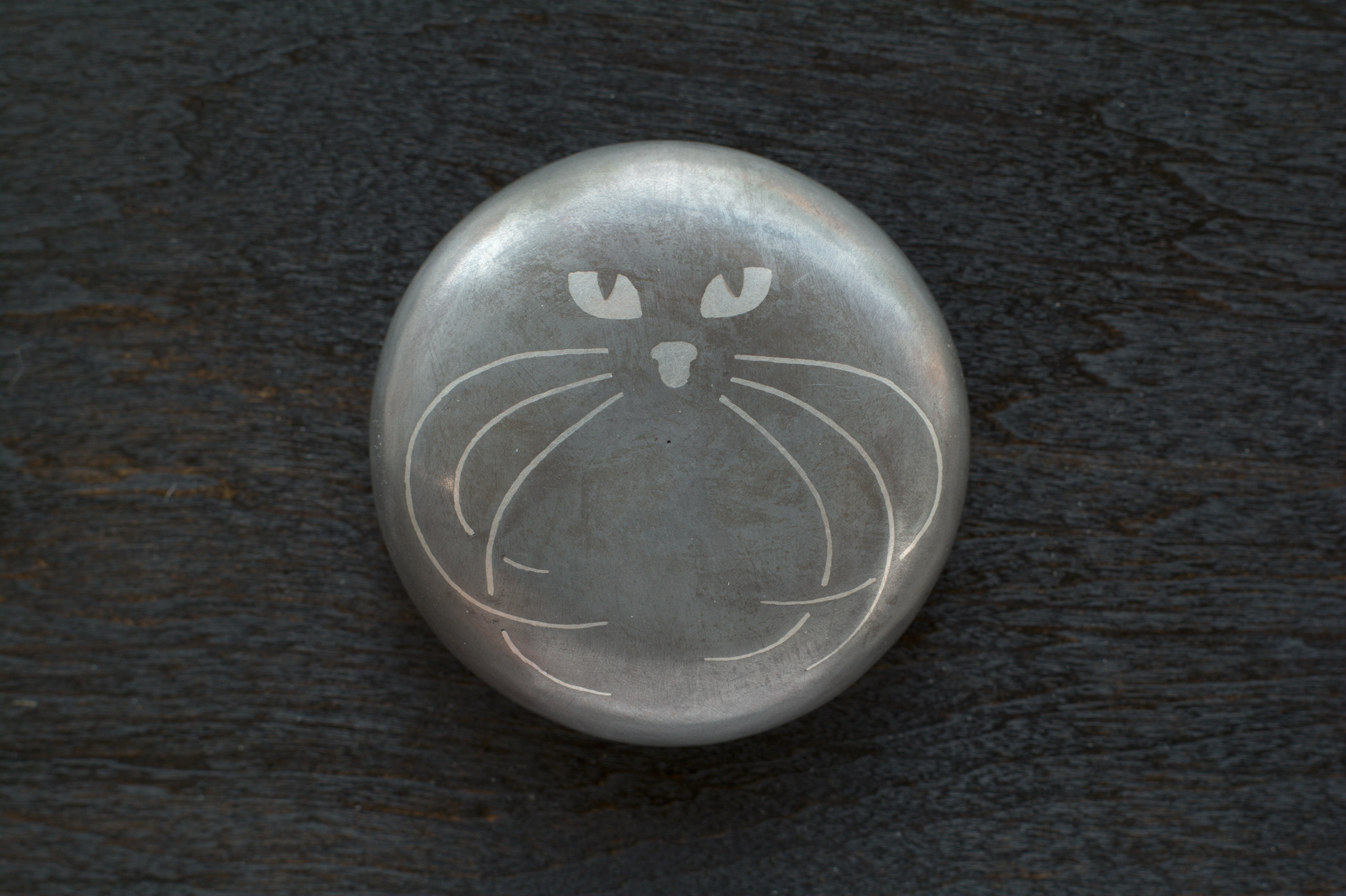